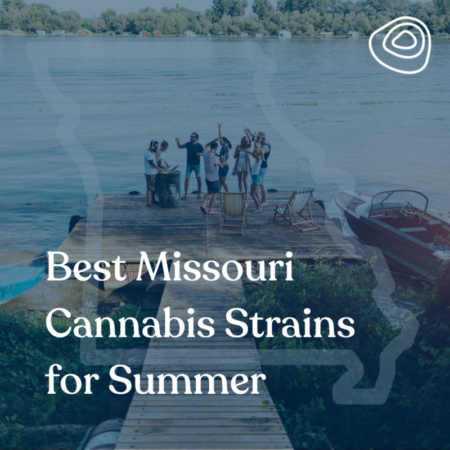 Summer is here and the fun awaits! We rounded up the Top 10 Best Missouri Cannabis Strains for Summer that are perfect for all of your summer fun in Missouri! Remember to tag us in your product and/or adventure pics on Instagram for your chance to get featured! Strain availability varies by location.

If you’re interested in overripe bananas and deep relaxation, Banana OG is calling your name. Mellow is the name of the game, not only in flavor and aroma, but onset time, as well. What starts as a light calming effect will eventually lead you to your couch, where you’ll remain for the rest of the night.

Deep Fried Ice Cream is an indica dominant hybrid strain. Its genetics are a cross between a Gelato strain and a Wedding Cake strain. The bud has a creamy cake-like aroma and flavor. The smoke is complex, with a robust mix of flavors. The effects are powerful and often described as a mellow euphoria.

Citradelic Sunset is a sativa-dominant hybrid cross of Ghost Train Haze and Mandarin Sunset. This strain has sour, sweet, and citrusy flavor notes for the nose and tongue. This strain is known for its energetic and inspiration-evoking high.

Ice Cream Cake is an indica marijuana strain made by crossing Wedding Cake with Gelato #33. This strain offers sedating effects that leave your mind and body completely relaxed. Ice Cream Cake features a creamy flavor profile with sweet hints of vanilla and sugary dough. This strain is reported by medical marijuana patients and consumers to have calming effects that help with pain, sleep, and anxiety. Ice Cream Cake weed is ideal for nighttime use when you have nothing important to do except watch TV and fall asleep

Grandi Guava is an indica-dominant strain created by Oakland, California’s Grandiflora Genetics. It’s a cross of Guava and Gelato, of which Guava is a phenotype. Given its parents, Grandi Guava is likely to smell and taste like sweet and sour citrus, gas, cream, and earth.

Mandarin Cookies, also known as “Mandarin Mints,” is a hybrid marijuana strain that gives off a sedating and calming high. It has flavors of sweet citrus and diesel. This strain is a great choice for an after dinner dessert that won’t leave you glued to your couch. Mandarin Cookies is made by crossing Forum Cut Cookies and Mandarin Sunset.

Gelato is a cross of Sunset Sherbet x Thin Mint GSC. While often cited as a balanced hybrid, we find the effects start to lean Indica at higher doses. After consumption, Gelato creates a sense of balance between body and mind, slowing racing thoughts and calming the body.

10. Planet of The Grapes by Vertical

Planet of the Grapes is an Indica dominant cultivar, it was bred by crossing Grape Diamonds and Chem D 95. It can be recognized by a sweet, fruity aroma with a hint of gas. As for its flavor, it has been described as having a fruity, and sweet taste of grape and citrus. Myrcene is the top terpene in Planet of the Grapes which makes this cultivar, a great choice for a mellow, relaxing night.

The November 8th elections in Missouri are almost here! Missourians will have the opportunity to vote on legalizing adult-use in […]